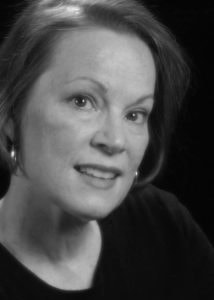 Kathleen is excited to be part of honoring and remembering the lives lost on the Princess Sophia. Kathleen has performed leading roles in Orpheus Project productions including The Gift, Rusalka, Cunning Little Vixen, and Suor Angelica, and leading roles in Juneau Lyric Opera productions including Carmen, La Bohème, Elixir of Love, Susannah, Tosca, Barber of Seville, and La Traviata.  She is the Music Director of the PFLAG Juneau Pride Chorus, and operates a private voice studio.  As a registered and licensed dietitian she is co-founder of the Arctic Food Security and Nutrition Network, and manager of six federal nutrition programs for the Alaska Department of Health and Social Services. Kathleen thanks her incredible husband, Dan, and daughters Nelli and Anna, for their many years of diva support. She commends Todd and the Orpheus Project’s board of directors for promoting innovation and collaboration in the arts, in Juneau and beyond. 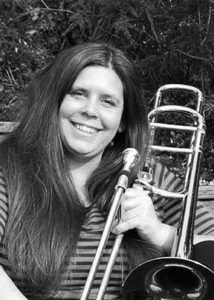 Katy Giorgio is our former president and treasurer of Orpheus Project, and served as the producer of The Princess Sophia opera world premiere. Ms. Giorgio received a Bachelor of Music from the Shepherd School of Music at Rice University in 2002 where she studied trombone performance and music history. Additionally, she received a Masters of Public Administration in 2016 and an Occupational Endorsement in Accounting in 2017, both from University of Alaska Southeast. Ms. Giorgio is an active trombone player in Juneau. She is principal trombone of the Juneau Symphony, and frequently appears with the Taku Winds, Amalga Chamber Orchestra, Gamble & the High Costa Living, Dale Wygant’s polka band, Juneau Big Band, and various stage productions of Perseverance Theatre, Orpheus Project and Juneau Lyric Opera. Ms. Giorgio produced the David Maslanka & Alaskan Composer Festival in 2015 at which she performed Maslanka’s Concerto for Trombone and Wind Ensemble with Mr. Maslanka in attendance himself. 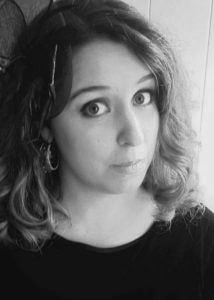 Kristina is excited and honored to step onto the stage for this incredible production recounting the tragedy of the Princess Sophia. Born and raised in Juneau, Kristina has performed on local stages since the age of four as both a vocalist and instrumentalist. By day, she is the finance associate at Sealaska Heritage Institute and by night, Kristina thrives within the musical community of Juneau. This year, she can be seen performing in the Taku Winds Concert Band, the annual Afternoon of Ave Marias, and in various other groups around town including the Juneau Symphony, the upcoming November concert marking her fifteenth season as a part of the French horn section.

Vocalist, instrumentalist, arranger, composer, and director, Kristina loves to perform as much as she possibly can. She studied piano for six years and joined the Alaska Youth Choir shortly after, singing and touring with the group for four years. Kristina studied French Horn with her father starting in sixth grade and performed as a handbell ringer with her mother and the Chapel Bell Ringers beginning in eighth grade. In high school, she was selected for the All-Southeast Alaska Honor Band, both All-State choir and band, All-Northwest Honor Band, and the Sound of America National Honor Band for one year during its 2005 tour of Europe. Kristina studied Instrumental Musical Performance at the University of Washington and went on to earn her Bachelors of Business Administration at the University of Alaska Southeast. Notably, she founded, directed, arranged for, and sang in the a cappella group Alaskapella while attending the University of Alaska Southeast. The vocal organization grew from four members to thirty within two years and, in its fifth year, performed at Carnegie Hall.
​
Kristina has been a part of the opera scene since middle school, performing first in Tosca under the direction of William Todd Hunt as a member of the pit orchestra. She has continued to participate in many performances over the following years, but always as a French horn player admiring the voices above. Kristina is delighted to make her debut opera singing appearance in Princess Sophia.
Proudly powered by Weebly